I've become that person. A person I hoped growing up I'd never become: an ajumma. Ajumma in Korean means "married woman" or "middle-aged woman" - and like many Korean words, is perfectly fine when used in certain contexts and carries a negative connotation when used in others.

When I think of the word ajumma, I think of opinionated middle-aged Korean women who tell you what's up, even if you never asked. And that's exactly what I've become.

On a recent visit to one of HK's hottest newly opened restaurants, when one of the owners came to ask how the food was, my dining companions all answered as they were expected to, with assurances of "everything's delicious." I answered with a half-hearted "umm...it's good." pause. "I mean, some things could use some work, but generally the food was ok." I'm sure my friends wanted to hide under the table. But honestly, I thought I was being kind because: (1) the food was actually terrible, and I at least softened my response by saying it was ok, and (2) if a new restaurant wants to stay open in the long run and their food sucks, they need to fix it - but if people keep telling them that their mediocre food is good, they'll never know they have anything to fix.

The owner actually seemed interested in my response and asked what I would suggest. I told him their albondigas were too dry and needed to be made with fattier meat and that the potatoes in the tortilla espanola were undercooked, as were the onions, which should reach a caramelized state before the eggs are added. I could have gone on, but I thought I'd stop with the two most glaring shortcomings. The owner took my comments graciously and even sent a round of drinks our way. I hope the restaurant improves their food and succeeds, because I am a huge supporter of anyone trying to start a new food business, especially because I know how hard it is. And really, I'm trying to keep my ajumma comments to myself because I don't want to be that annoying opinionated customer!

When I opened love at first bite in Berkeley, I listened to people's suggestions, whether they were good or bad, reasonable or farfetched. Because as a business owner, that's what you have to do - you have to be open to both customers' praise and complaints. Sometimes, even when you want to tell people to go away, you have to smile and listen. And then you have to make a judgment call - whether their suggestion is worth taking into account or not. Sometimes, it's not.

One day, in the early days of the bakery, a person walked in and asked if we had any items that did not contain any of the following: gluten (which is in wheat), eggs, dairy or sugar. Um, an item that doesn't contain any flour, sugar, eggs or butter? In my head I screamed: "We sell cupcakes! What the hell do you think cupcakes are made of?!" But to the lady, I answered with the nicest smile I could muster: "I'm really sorry, we currently only have cupcakes and cookies that include those items, but you know what, we really should look into developing recipes that don't have any of them." She nodded in agreement and left the store. And I mentally checked her suggestion into the box called: NEVER.

Which is not to say that someone out there shouldn't open a bakery that is wheat-free, sugar-free, dairy-free and egg-free. Especially in Berkeley or the SF Bay Area, where there is certainly a market for it. But it just wasn't going to be me. In fact, one of the main reasons I decided to open love at first bite was because I felt that the area didn't have an old-fashioned American bakery - fancy French patisseries, artisan sourdough bread bakeries, vegan collective bakeries, yes. But not a good old-fashioned American bakery specializing in exactly what the woman didn't want: butter, sugar, flour, eggs.

However, in order to be successful, you have to take your customer base into account. And having lived in Berkeley for awhile, I knew that meant that I'd have to come up with at least a vegan cookie. But I refused to compromise on taste, or specifically, the down-home comforting taste of a lovingly made cupcake (which normally requires copious amounts of butter and sugar). In the end, I fiddled around until I came up with a recipe for vegan chocolate cake that was still sinfully rich and chocolatey, as well as a flourless almond orange torte that was moist and decadent. But I never could come up with a decent baked item that managed to be gluten-free, sugar-free, egg-free and dairy-free, which is why we never offered them (and to my knowledge, still are not offered at love at first bite). It's just not possible: it will not taste the way a cupcake should, in which case, you're better off not eating it.

Happily, the majority of my wonderful customers were perfectly content with what we were offering, and the niche we were trying to fill in otherwise vegan, hippie Berkeley (as a side note, I have absolutely nothing but respect for vegans and maintain a vegan diet myself, except that it includes meat, poultry, fish, eggs and lots of dairy).

These days, I cook mostly for my husband and myself, and the occasional dinner guest. And as fate would have it, I married a person who has an extremely sensitive palate. I've never been as nervous that someone would like my cooking or baking as I am with my husband. Mostly, because he's always right (don't ever tell him I said that).

There's rarely a meal that I prepare where when I ask him how the food is, he doesn't reply with "You know what would make it better? If you added a little [sugar/salt/garlic/soy/cheese/etc.]" And I have to admit - almost every single time, when I really parse the flavors in my mouth, I realize he's right. So when I put something in front of him and he says "this is good" without any other comment, I feel like I've won the James Beard award. And I can count on my fingers exactly how many times that's happened.

One of the first times he asked for seconds without any suggestion of how to make the dish better was when I made cilantro corn rice as a side dish to blackened Cajun catfish. The catfish itself had a little too much spice (the recipe I found called for WAY too much cayenne, and I really should have known better than adding the whole amount!), but the cilantro corn rice was delicious, and is a regular on our dinner table, especially with Southern or Mexican food. And best of all, it's extremely easy to make. I tossed this together because I happened to have cold leftover rice in our fridge, as well as a fresh bunch of cilantro (or coriander, as it's called in these parts) and a cob of sweet corn. It was a happy accident of flavors that compliment each other perfectly.

Ingredients
Leftover white rice - preferably long grain and at least a day old and refrigerated
Cilantro - chopped fine (I usually use just the leaves, but it's fine to throw in some stems too)
Lime or lemon
One ear of sweet organic corn (if you don't have this, you can use canned corn, but the results will be noticeably poorer)
Sea salt
Extra virgin olive oil
Butter (optional)

This dish goes well with fish and Mexican food, especially with burritos or tacos. 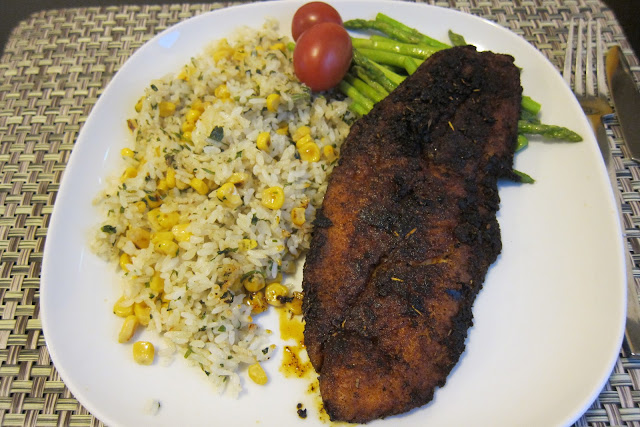