I used to throw away the remains of day-old baguettes, until I discovered that they are a perfect vehicle for bread pudding (although my favorite bread pudding is made with fresh toasted challah). But bread pudding, while wonderful in its dense, homey deliciousness, isn't something you can make every time you have leftover bread, unless you happen to have a couple marathon runners in the house (which I don't). Plus, while I love baking sweet goods, I actually prefer to eat savory foods.

I craved a lot of salads the past few weeks - the warm fall weather in Hong Kong reminds me so much of summer in Northern California, which made me want to eat as if I were in Northern California. That meant replacing boiled vegetables in broth (in HK, they even boil lettuce - and it's surprisingly delicious with a little bit of oyster sauce) with fresh leafy salads. I think that because salads require assembling more than cooking, I often forget to plan the ingredients I need carefully. So I usually end up chopping up whatever vegetables and cheeses I happen to have in the fridge with a bag of mixed lettuce, boiling a couple eggs, and tossing everything together with a homemade vinaigrette (on a tangential note: homemade salad dressing is the easiest thing to make in the world - I'll include a recipe later in this post. I never buy bottled dressing anymore!).

But a couple weeks ago as I was putting together a salad for dinner, I had a craving for panzanella - that wonderful, hearty tomato and bread salad that the Florentines ingeniously came up with as a way to use up stale bread. But I also wanted something a bit...meaty, without actually having meat in it. Truffles, that would do the trick.

I happened to have 1/2 a French baguette left over from the previous night's dinner. I had a bottle of black truffle oil and a jar of Maldon sea salt. And so I proceeded to make black truffle croutons for the salad. I tossed some mixed greens (romain, radicchio, frisee), sweet heirloom cherry tomatoes, shavings of pecorino cheese, fresh kernels cut from an ear of corn, avocado and a generous serving of black truffle croutons with dressing. What I ended up making was not so much a panzanella as a mixed summer salad starring truffled croutons. I decided then and there that my favorite salads from that day forward would not star vegetables, but bread. Stale bread.

It was so delicious that I've made it 3 more times in the past couple weeks, until my craving for truffle oil was fully satisfied.

Ingredients
Day old baguette or other hard-crusted bread (in HK, I especially like the baguettes from Little Mermaid Bakery inside IFC CitySuper, Il Bel Paese, or Po's Atelier for this recipe) 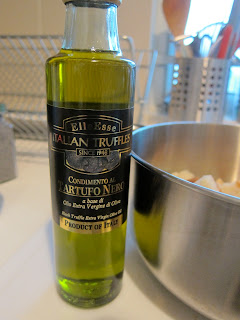 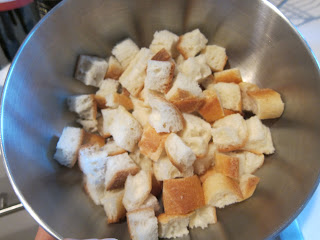 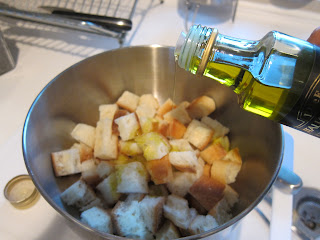 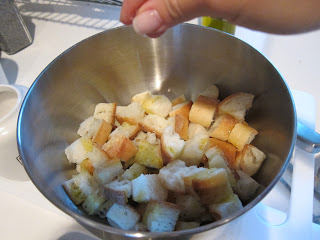 4. Sprinkle a generous amount of sea salt over the bread and oil. Toss thoroughly, until all of the cubes are coated lightly with oil.

5. Line a baking sheet with parchment paper or aluminum foil. Spread the bread cubes on the lined baking sheet evenly. Make sure there is only one layer of cubes.

6. Bake for about 10 minutes, until crispy outside but still with a little bit of chewy pull on the inside. 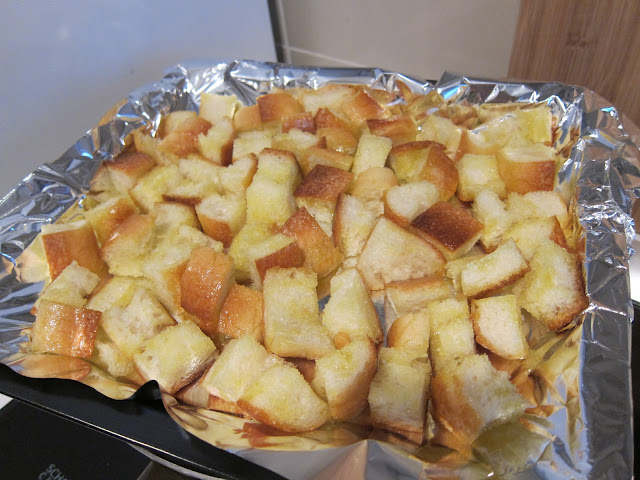 The finished croutons. Looks so humble, but packs a powerful and delicious truffle punch to any salad.

Recipe for simple vinaigrette
Good quality fruity extra virgin olive oil
Good quality French mustard (Grey Poupon will do in a pinch, but try to get the best quality you can find)
Honey (any will do, but I am really partial to lavender honey for this recipe)
Sherry, apple cider or white wine vinegar
Sea salt
White or black pepper
Fresh herbs, whatever you have (thyme, rosemary or parsley work best)

Preparation
1. Add a tablespoon of mustard, a teaspoon of vinegar and a good glug of olive oil to a big mixing bowl and whisk together until well-mixed.
2. Drizzle in some honey and whisk together.
3. Add a pinch of salt, a turn or two of freshly ground pepper and about 1/2 tablespoon of fresh chopped herbs and whisk.
4. Whisk in more olive oil until the dressing is the consistency you want. If the olive oil is too fruity, you can use a blend of 3/4 olive oil and 1/4 vegetable oil.
5. Taste the dressing and add more vinegar, honey or salt to your taste. If you're making bread salad with black truffle croutons, don't make the dressing too sweet or the sweetness will overpower the scent of the truffles.
Posted by Deb at 10:52 PM