Pumpkin chocolate bread (and the story of love at first bite)

Back in 2005, when I was sort of a young hippie dreamer (well, let's be honest here - as young hippie a dreamer as a junior corporate lawyer can be), I came across an empty store for lease in Berkeley while I was grabbing coffee at the original Peet's Coffee on the corner of Vine and Walnut Streets. It was inside a sunny little square that included Peet's, a charming lettepress/stationery shop called Twig and Fig and a greasy spoon diner. And I thought: "this would be the perfect place for a cupcake bakery."

I'd been baking since I was a kid, and had spent an inordinate number of hours in law school baking and developing recipes. Cupcakes were all the rage in New York, but other than a cupcake delivery service in Silicon Valley/Peninsula (Sibby's), at the time, cupcakes hadn't really hit the San Francisco bay area yet. And my 25 year old self thought: "you know what, I think I am going to open a cupcake bakery in the Bay Area." And so that's just what I did. When you're 25, everything seems possible, and so, everything is possible.

Never mind that I'd never started a business, nor had any formal culinary or pastry training. Also, never mind that the store for lease was just a shell - no kitchen, not enough electrical wiring or plumbing, nothing. Within two months, I had contacted the landlord and negotiated a lease with a build-out period; hired contractors, carpenters, electricians to build out the space into a functioning bakery; and spent my entire meager life savings and maxed out two credit cards buying bakery equipment. I spent the next 3 months begging and pleading with the City of Berkeley zoning and permit departments to approve the space to be zoned as a bakery/food retail space and issue timely permits to allow the renovations/plumbing/rewirings (for a city that is supposed to be all about freedom and rights and the fight against the system, Berkeley has some of the most bureaucratic red tape in the country). I was still working full-time as a junior associate at a law firm as well, then going home and testing/adapting recipes at night to be sold in mass quantities.

After a couple delays, the doors to love at first bite cupcakery opened at the end of May 2005. It is to this day, my proudest accomplishment - the result of blood, sweat, tears, life savings, credit card debt, the love and support of family, friends and community, and many, many pounds of butter, sugar and flour.

I no longer own the bakery (that's a story for another day), and after I sold the bakery, I wasn't able to bake for years and years. I don't know if it's because I breathed in so much butter and sugar during my bakery days that afterward the scent of cakes baking made me nauseated, or whether it's because deep-down, selling the bakery felt a little bit like giving my baby away and I just wasn't able to face another mixing bowl again.

When I first started dating my now-husband, it had already been years since I sold the bakery and my fire-engine red Kitchenaid mixer had been gathering dust on my kitchen counter. He knew I had started a bakery previously, but because I never baked anything for him, I don't think he believed I actually knew how to bake. So one evening, I decided to bake him red velvet cupcakes, one of the bakery's best-sellers. I creamed the butter and sugar and bright red food dye. Mixed the dry ingredients together. Did that magical little step of adding vinegar to baking soda. Folded in all the ingredients, filled the cupcake pans and stuck them in the oven.

When the cakes came out of the oven, they hadn't risen properly. Instead of fluffy, moist cakes like the ones I used to make at love at first bite, these cakes were dense and heavy. It was a complete and utter fail. I don't know if it's because some of the ingredients had been sitting in my pantry too long, or whether it's because the cake batter just knew my heart still wasn't into baking again. But that miserable fail scared me away from baking again for years and years.

But it's October in Hong Kong, the weather has cooled considerably and the international grocery store aisles remind me that Thanksgiving is just around the corner (every store has piles and piles of Libby's canned pumpkin for sale and notices that turkeys can be pre-ordered already). It also happened to be a good friend's birthday this past Friday, and I suddenly felt inspired to bake again. And I knew just what I wanted to make: pumpkin bread.

To me, pumpkin bread tastes like Thanksgiving with its pumpkin pie spices. It's homey and soothing and very American. And even though I love living in Hong Kong, sometimes I just need a piece of America here. 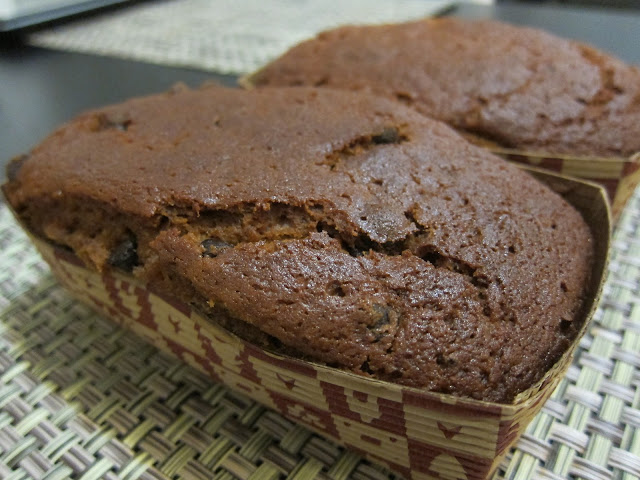 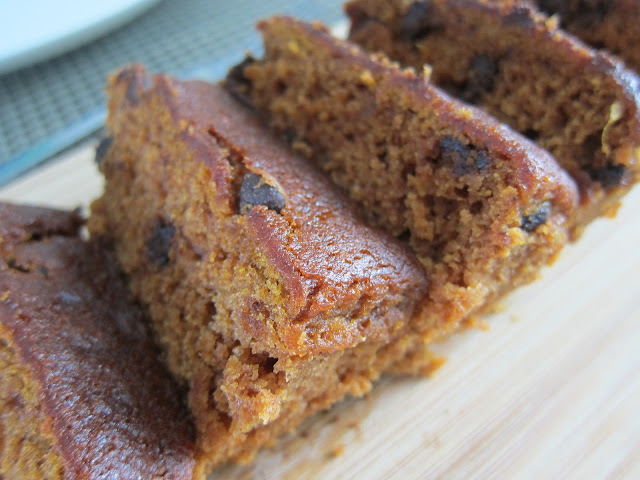 The pumpkin makes this bread extremely moist, and the combination of cinnamon, ginger, nutmeg and cloves makes the kitchen smell like pumpkin pie.

Ingredients/Sources in HK
3 cups all-purpose flour - you can find Gold Medal flour at Oliver's in the Prince's building
1 tablespoon + 1 teaspoon pumpkin pie spice  - recipe follows. You will need cinnamon, ginger, nutmeg and cloves
2 teaspoons baking soda  - I like Arm & Hammer, which you can find in almost any grocery store here
1 1/2 teaspoons table salt  - make sure you use table salt, not fancy or flaky salt
3 cups granulated sugar
15-ounce can of Libby's pure pumpkin - not the canned pumpkin pie mix, but pure pumpkin. It's available now at 360, Oliver's, CitySuper
4 large organic eggs
1 cup vegetable oil  - you want to use corn, canola or vegetable oil for this, not olive oil, which has a strong scent of its own and will change the flavor of the cake
2/3 cup fresh squeezed orange juice  - one orange should yield about 2/3 cup. Find the sweetest oranges you can find
1 cup semi-sweet chocolate chips  - I like Hershey's or Ghirardelli, you can usually find these at CitySuper or Oliver's

Combine the flour, pumpkin pie spice, baking soda and salt in a mixing bowl. Mix the ingredients together.

Whisk the sugar, pumpkin, eggs, oil and orange juice in a separate bowl and beat until smooth. Add the wet mixture to the dry mixture and whisk until the dry ingredients are just incorporated into the wet ingredients, but do not overmix. Fold in the chocolate chips. Fill muffin or loaf pans about 3/4 full. Do not overfill, or the batter might overflow while baking.

For cupcakes, bake about 20-25 minutes; for loaves, bake 60-65 minutes. A wooden toothpick inserted in the center should come out clean. Let cool for 15 minutes before serving.

Some recipes call for allspice, but I like this version which omits it.

Mix 4 teaspoons cinnamon, 1 teaspoon ground ginger, 1 teaspoon nutmeg and 1/2 teaspoon cloves. This will be more than you need for one batch recipe of the pumpkin chocolate bread, so store the rest in an airtight container.
Posted by Deb at 6:37 AM