Gazpacho, a taste of summer in Spain

I fell in love with Spain from the moment I arrived in Barcelona the first time, back in 2006. Since then, I've tried to visit at least once a year - my trips always include a new part of Spain I haven't been to previously, but also always include at least a couple days in Barcelona, my happiest place on earth. This past summer, my annual pilgrimage to Spain included a drive down to, then back up to Barcelona from, the Costa Blanca, with stops in Alicante, Denia and Valencia, and ended with the requisite couple days in Barcelona.

Gazpacho is the ultimate summer food in Spain - refreshing, light yet deeply satisfying. There are many variations to gazpacho, but my favorite is a nice and simple traditional version made with day-old bread that cuts the acidity of the tomato and vinegar and makes the cool soup creamy and smooth.

My recipe is adapted from Jamie Oliver's jamie does...spain, italy, sweden, morocco, greece, france. After fiddling with the recipe, I found that adding a handful of marcona almonds to the blend makes the soup even creamier, and really gives the dish a nice richness. 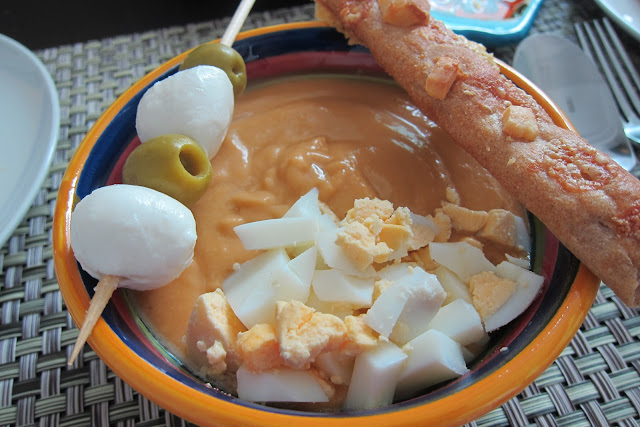 Ingredients:
2 2-inch slices of day-old bread (I like to use rustic country bread - cut the crust off and just use the white part)
5 or 6 medium ripe tomatoes, the sweetest ones you can find
1/3 of an English cucumber or 1 kirby cucumber
1 bell pepper of any color, deseeded and chopped
2 cloves of garlic, peeled and smashed roughly with the side of your knife
A glug of good-quality Spanish EVOO
Apple cider vinegar
Maldon sea salt
Freshly ground black pepper
A small handful of marcona almonds

Sources for ingredients in HK:

Preparation:
Cut off the crust of the bread and soak in a bowl of water. Prick each of the tomatoes with a sharp knife, then put in a bowl and cover with boiling water for about 20-30 seconds. Drain, then peel the skins off the tomatoes. In a food processor or mixer, add the tomatoes, cucumber, green pepper and garlic. Top with the soaked bread, and pour in a generous glug of EVOO and a little apple cider vinegar. Go easy on the vinegar - you can add more later if you like it more tart. Blend until smooth, add salt and pepper to taste. If you really need to, you can add a pinch of sugar, but if the tomatoes are sweet, it will not be necessary. Add in the almonds and blend again until smooth. The color will be a cool orangeish pink, slightly creamy looking. Add more EVOO or vinegar to your liking and blend. Put into a bowl or jug and cover with saran wrap and refrigerate for at least 2-3 hours.

I like to serve this topped with a little bit of chopped hardboiled egg or half a hardboiled quail egg, a bamboo stick skewer of sweet cherry tomatoes, mini mozzarella balls and olives, and a freshly baked crouton or fromage stick from Po's, as pictured above.