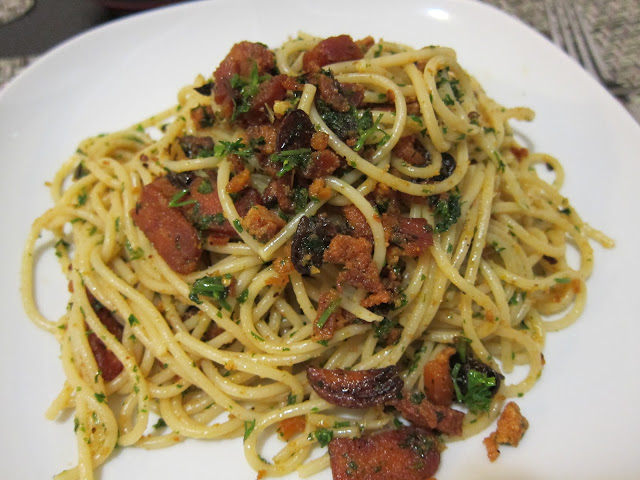 I recently watched an episode of Anthony Bourdain's No Reservations where he travels to Sardinia and eats a plate of spaghetti with bottarga. The way he waxed poetic about it immediately made me a bit obsessed with trying the dish. Luckily, just a week later I was assigned to review Nicholini's by Asia Tatler, where spaghetti with bottarga was on the menu. Nicholini's version included a dollop of sea urchin on the top, which I though made the dish metallic and bitter (even though I usually love sea urchin), so I didn't mix it in with the pasta. The dish itself was very simple: homemade spaghetti tossed in olive oil and bottarga. It's basically just aglio e olio, the most simple of pasta sauces, but with bottarga added in. 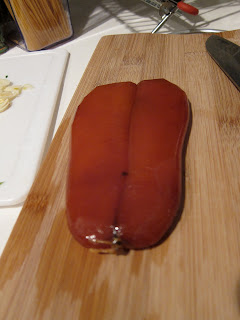 And bottarga makes ALL the difference. Bottarga is the dried roe sac of the mullet fish. It's reminiscent of Japanese mentaiko (cod roe), but a lot more unctuous and silky-tasting and a lot less salty. It looks like the photo on the right. The spaghetti with bottarga at Nicholini's was absolutely delicious - slick with olive oil and garlic, salty and savory from the bottarga. I was sold. But at something like US$50 for a plate, it's not something I can eat everyday, so I was obsessed with finding bottarga and making the dish at home. I went to every gourmet store in Hong Kong - the only store that carried bottarga was Il Bel Paese, an Italian grocer, but they didn't have the full dried sacs of roe - only a jar of shaved roe (and it was TUNA, not mullet). 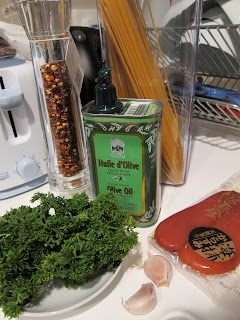 But the heavens heard my plea for bottarga. Quite randomly, my husband and I decided to fly to Kaohsiung for the weekend, just to get out of HK for a day. And what do you know - dried mullet roe is a specialty of the region. So, I bought a sac of mullet roe and last night, I finally cooked spaghetti with bottarga at home. All you need are the 6 ingredients on the right: spaghetti, Italian red pepper flakes, good olive oil, parsley, garlic, and bottarga.

Ingredients/Sources in HK
Spaghetti - any grocery store
Red pepper - I found this bottle of dried Italian peperoncini at Apita in Quarry Bay
Italian parsley  - also available at Apita, but also at most other grocery stores
Olive oil  - we got the one pictured during our visit to France, but you can get good olive oil at any of the international grocery stores - CitySuper, Oliver's, 360
Garlic  - also available at any grocery store or wet market
Bottarga - sorry...not available in HK, except for out of a jar at Il Bel Paese. But you can buy bottarga at the airport in Kaohsiung, and you can also find it in Tokyo

Preparation
Slice 2 cloves of garlic as thin as you can. Chop a handful of parsley (not as much as pictured above - about half that amount) finely. Slice the bottarga into thin slices. I used about half the bottarga shown above.

Heat a pot of water with a tablespoon of salt. When the water boils, add dry spaghetti. Cook to al dente.

Meanwhile, heat a pan over medium-high heat and add a very big glug of olive oil (6-8 tablespoons). Add the garlic and about 1/2 teaspoon of red pepper flakes and stir so it doesn't burn. Lower the heat to medium-low. Add in the bottarga slices and stir around with a spatula or wooden spoon. Some of the bottarga should start crumbling, and this is what you want. Add about 3/4 of the parsley, stir to mix, then turn off the heat.

When the spaghetti is cooked to your liking (I like very slightly al dente), take off the heat and drain, saving about two tablespoons of the water. Turn on the heat under the olive oil-bottarga mixture. Add the pasta to the pot of oil and bottarga. If the pasta is too dry, add some of the reserved water from the cooked pasta to loosen. Toss to mix, add the rest of the parsley. Serve immediately. I like to drizzle more olive oil on top. I think it would also be good with toasted breadcrumbs on top, though I haven't tried it yet.
Posted by Deb at 8:49 AM